The gods have called down from Asgard and have sent their valkyries in search of the best Slingo players. This fantastic Norse themed return to the famed Slingo grid continues to wow the internet. Spin a slot reel to cross off a line of 5 numbers of the 5×5 grid. Getting 5 numbers in a line gets you a Slingo, pushing you further up the bonus ladder and giving you the chance to embark on seven epic Slingo Valkyrie bonus rounds. 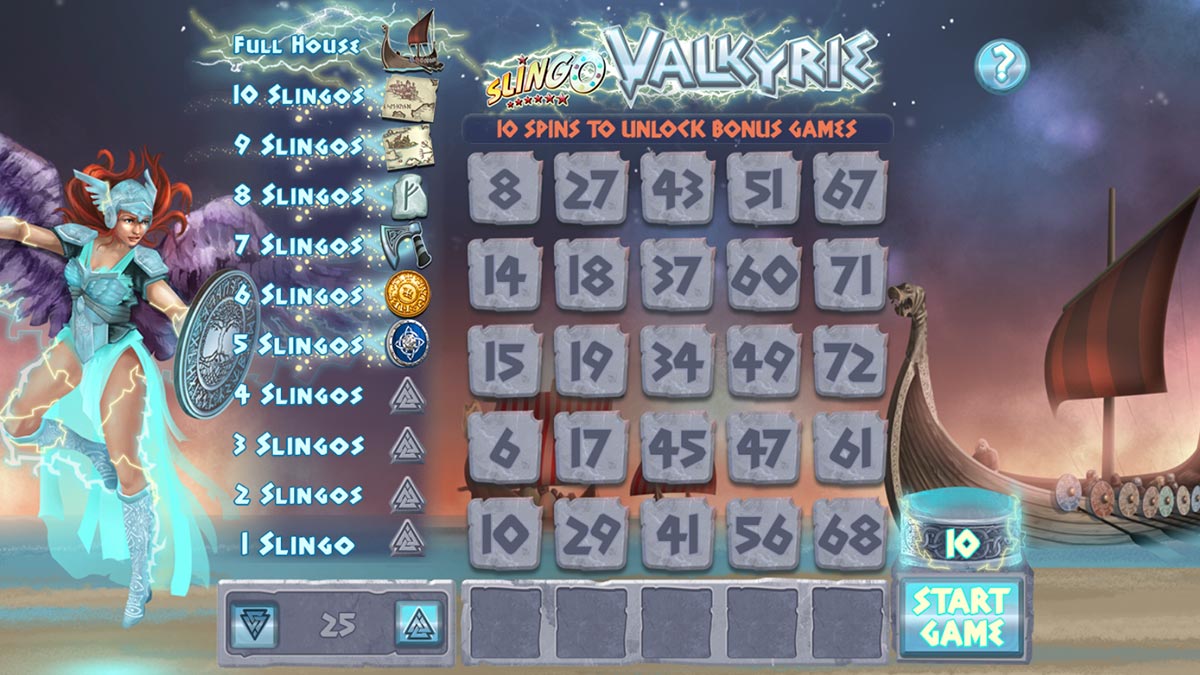 Slingo Valkyrie and a band of legends

You won’t be going alone on your quests for wins and glory. The Slingo characters have returned to aid you in your adventure in the myths of the Northmen:

Getting your hands on 5 slingos and reaching the shield icon on the bonus ladder will begin that bonus round. You must pick between 3 shields to reveal a multiplier. Pick wisely, as they’re all different and some are larger than the others!

Should you reach the coin symbol on the bonus ladder, you’ll begin the Fafnir’s Hoard Bonus. 50 coins spin to show winning values, with the chance to play 4 rounds which rise in value, with multipliers ranging from x0.5 to x10!

Reaching the axe symbol on the bonus ladder will take you to Skeggoeld’s Trial Bonus, where you have 3 throws of your axe to reveal values between x1 and x5, with the opportunity for more axes to be found. That’s not all however! Should you hit all the targets with 1 or 2 axes remaining, you’ll get your hands on double triple the total win respectively!

In Olrun’s oracle Bonus you must also attempt to find the targets, all of them multipliers between x1 and x5, but this time having 3 or more spare lightning bolts will quadruple your total win!

Should you succeed in reaching the map symbol on the win ladder, you’ll find yourself in Hervor’s Passage Bonus. Spin the wheel to sail forward through the passage until you hit a star. Granting you the chance of big multipliers

Leaving Midgard we arrive at Yggdrasil’s Realm Bonus, another spinner game. However, much to its sacred position, all amounts are doubled in Yggdrasil’s realm! Giving you the chance to grab some death-defying wins!

When you make it to the top of the ladder, you’ll find the longboat symbol. Allowing you to participate in the final bonus round: Escape Jormundgandr. Should you succeed in escaping Jormundgandr you might have the chance of getting your hands on a big multipliers to your total wins!

Not only do you have this content brimming experience, but with a limitless opportunity to purchase extra spins, you’ll be able to continue your quest without falter in Slingo Valkyrie!

Play Slingo Valkyrie on your phone or in a browser